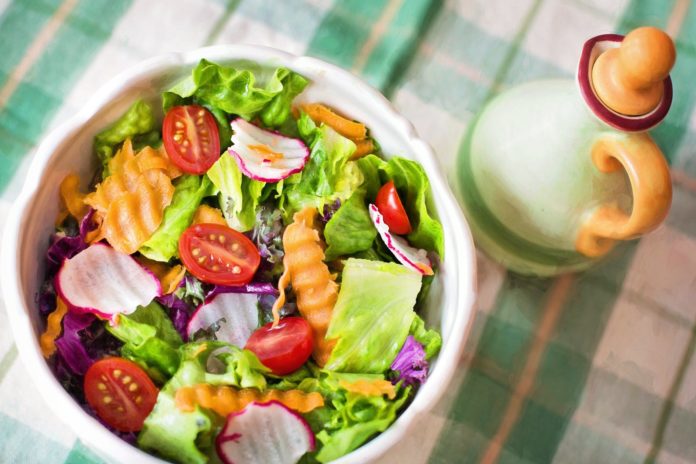 A new survey commissioned by the Health and Food Supplements Information Service (HSIS) has highlighted that the public have worrying gaps in knowledge about nutrition, leading to those who adopt dieting trends such as vegetarianism and veganism to have an enhanced risk of nutritional deficiencies.

The OnePoll survey interviewed 1000 vegetarian and vegan adults across the UK and found that 28 per cent of vegans and 13 per cent of vegetarians have been diagnosed with a nutrient deficiency following a blood test. The key nutrients which could be an issue on vegetarian or vegan diets were iron, vitamin D, vitamin B12, calcium and zinc. These are all found in animal-sourced foods but tend to be less bioavailable or present in smaller amounts, in plant foods.  Yet, despite this, more than six in 10 people claimed that their plant-based diet provided all of the nutrients they need.

The examples of deficiency were accompanied by poor general knowledge about how to obtain adequate nutrient intakes when following a vegan or vegetarian diet. While one in ten respondents had turned to a meat-free diet in the past year and half had been vegan or vegetarian for longer, 60 per cent overall admitted that they had done no research before cutting out animal products and most did not take a targeted dietary supplement, as recommended by the NHS and the Vegan Society. 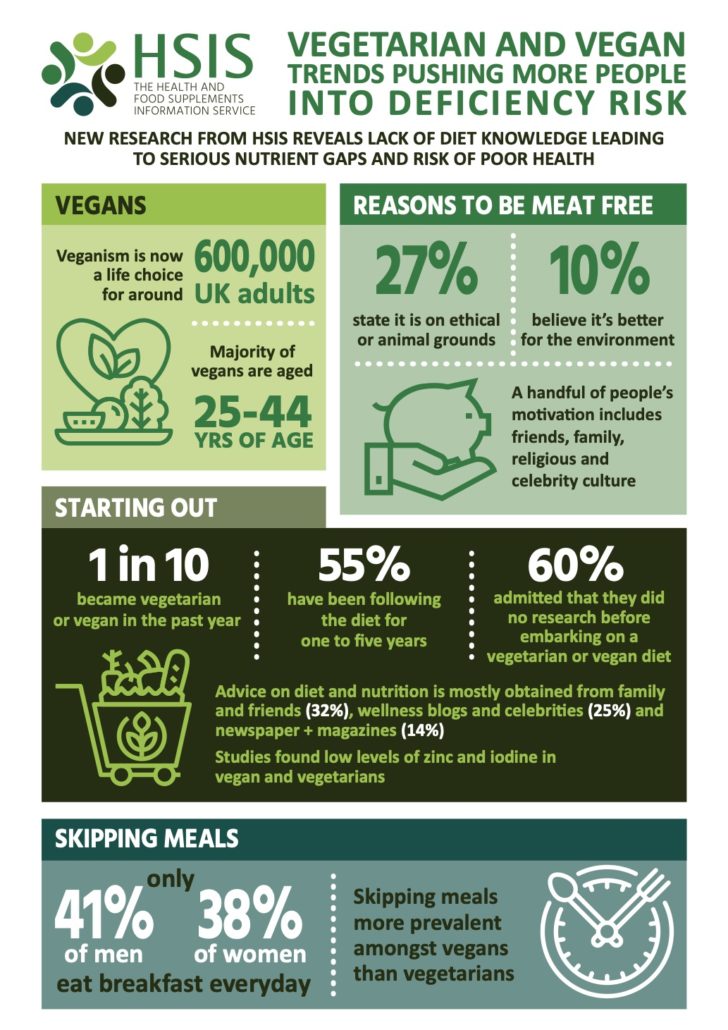 Dietitian, Dr Carrie Ruxton who advises HSIS, comments: “Many people start a vegetarian or vegan diet without doing any research at all. Simply cutting out whole food groups without prior planning isn’t ideal as most animal and marine foods are a good source of essential nutrients e.g. oily fish provides omega-3 fatty acids and vitamin D, meat contains iron and zinc, and dairy is a source of vitamin B12, iodine and calcium. These nutrients are needed to support health but often people following vegetarian or vegan diets aren’t aware that some of these nutrients can be tough to get from plant sources. A vegetarian and vegan diet can still be healthy, but it does need extra planning to make sure the right balance of nutrients is consumed.

“For vegetarians who avoid marine foods, or those on a vegan diet where no fish, dairy or animal products are eaten, a supplement may be necessary as, for example, iodine, zinc and vitamin B12 are difficult nutrients to get from a vegan diet. The long-chain omega-3s (EPA and DHA) are not widely available from plant sources so, for anyone who doesn’t eat fish, including foods such as walnuts, milled seeds such as flax and hemp seeds, and rapeseed oil is essential and you might want to consider taking a vegan algae-based omega-3 supplement which is rich in EPA and DHA”. 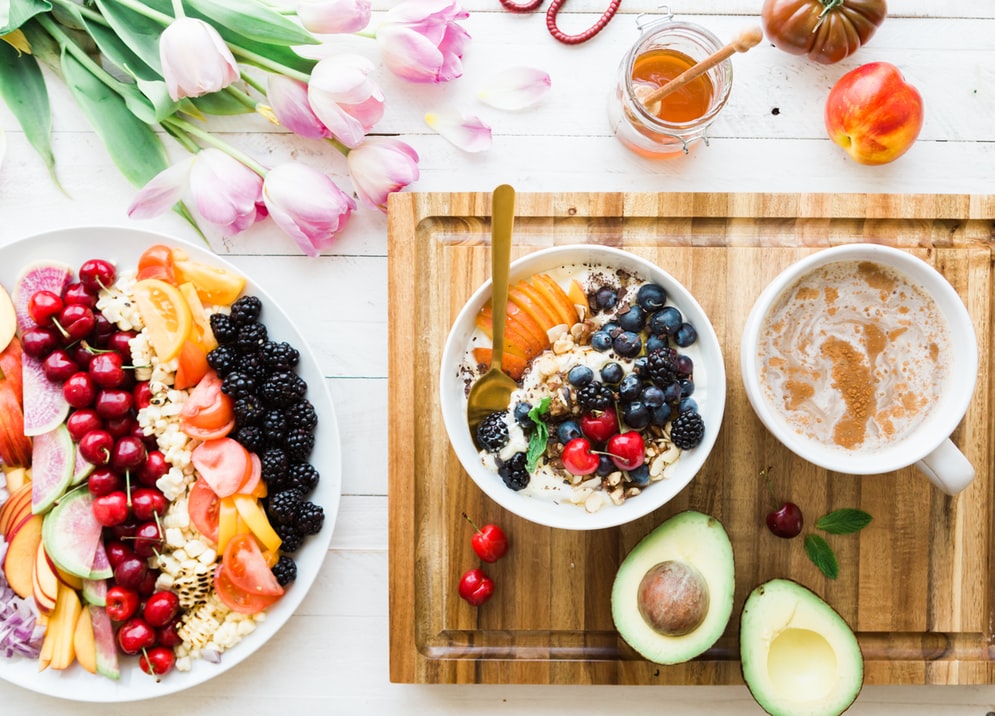 Obtaining accurate and appropriate information is vital before restricting key food groups, yet the HSIS survey found that advice on diet and nutrition came mostly from family and friends (32 per cent), wellness blogs and celebrities (25 per cent) or newspaper and magazine articles (14 per cent).

These less qualified sources perhaps explained a general lack of knowledge amongst vegans and vegetarians with only a quarter aware of iron and zinc issues, six per cent aware of iodine deficiency, and significant groups believing – wrongly – that apricots, spinach, mushrooms and apples are high in protein or that broccoli (33 per cent) and pulses (20 per cent) were good sources of vitamin B12. On top of this, one in four had no idea where to get omega-3s in the diet – important fats for heart and brain health. In contrast, one in ten worried unnecessarily about lack of vitamin C – a negligible risk as plant foods are a rich source.

Other eating habits explored in the HSIS survey gave rise for concern. Only 41 per cent of men and 38 per cent of women report eating breakfast every day and, worse still, around two other meals a week are regularly skipped, slightly more among women. Skipping meals is also more prevalent amongst vegans than vegetarians (2.3 vs 1.9 meals skipped per week) raising further concerns about the adequacy of dietary intakes.

Dr Carrie Ruxton adds: “With meal skipping habits and gaping holes in nutrition awareness, it’s hardly surprising that those who eliminate animal products without considering fortified foods or targeted supplementation might be facing a greater risk of nutrient deficiencies. This survey revealed that an alarming 29 per cent of vegans and 42 per cent of vegetarians were not taking any multivitamin or mineral supplements despite expert advice to the contrary, especially for vitamin D, iodine, vitamin B12, selenium and, in targeted groups, omega-3 fatty acids”.

Dr Ruxton concludes: “Improved awareness of potential nutritional gaps and considering a daily multi-vitamin and multi-mineral supplement are clearly priorities for vegetarian and vegan populations in the UK to help prevent the poor health outcomes associated with an inadequate diet. In addition, taking an algae-based omega-3 supplement is also worth considering for those who have cut fish out of their diets altogether. Omega-3 is vital for normal brain and heart health whatever your age.”

5 tips for getting started on a vegetarian or vegan diet