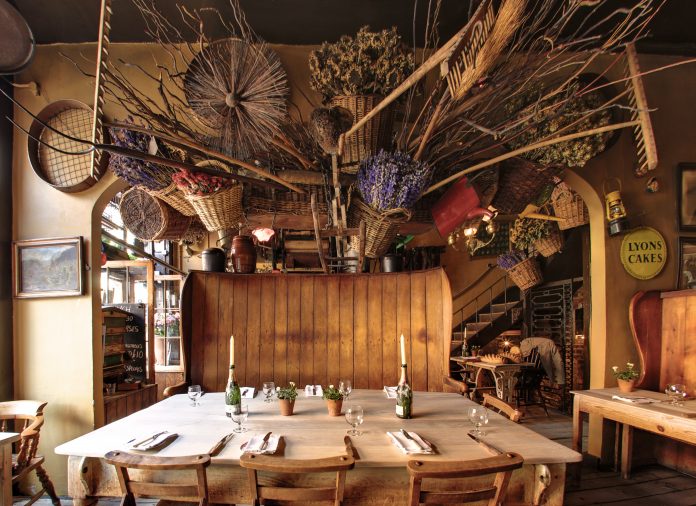 Kensington Mums recently headed out and had dinner at Maggie Jones’s in Kensington.

Charming, authentic and welcoming are the first 3 words that came to mind when stepping inside Maggie Jones’s. The pictures speak for themselves. The decor was welcoming with a rustic feel. Set up on 3 levels, the restaurant has plenty of places and can make for a cosy diner in amoureux, but can easily welcome larger groups too.

Maggie Jones’s opened in 1964 as Nan’s Kitchen, which was at the time Princess Margaret and Lord Snowden’s favourite restaurant. In the early Seventies the restaurant changed its name to Maggie Jones in honour of its most famous client, who used to book under the alias ‘Maggie Jones’. Over the years, it has actually welcomed most of the Royal family. Sister of French restaurant La Poule Au Pot, Maggie Jones’s has been a favourite haunt among Kensington locals for over 40 years. This family-owned restaurant is tucked away in a little cul-de-sac between Kensington High Street and Kensington Church Street.

Maggie’s is warm, friendly and traditional, with a generous menu full of classic dishes, beautifully cooked, including a selection of pies (such as the famous Maggie’s creamed fish pie), as well as daily soups, salads and roasts. During shooting season, the daily specials include the game of the day.

We were welcome by the manager on duty and were seated upstairs in a cozy booth. We had a funny waiter who helped us with our decisions as were were only two and wanted to share most of the plates. The dinner special came on a huge board, and the waiter kindly explain We started with the avocado and prawn salad and the very well executed almond and spinach tart. To be honest, we ate more of the crab than the avocado which was a bit dry, but the crab was delicously prepared. As for the tart, I was a bit unsure of the combination before trying it, but the marriage of the slightly crispy almonds with the tender spinach was simply divine. While we waited, we were served a very nice French Sauvingon blanc with cassis. That special touch gave it a special sweet taste to my liking off course. For dessert we had the bread and butter pudding with custard, and Maggie’s apple crumble which normally comes with cream, but we asked vanilla ice cream instead. The bread and butter was finger licking good, with a slight taste of grilled bread at the top, it was tender in the middle and melted well with the custard.

Kensington Mums was impressed. The food and the service were both fantastic, but be warned , portions are very generous so don’t order too much!