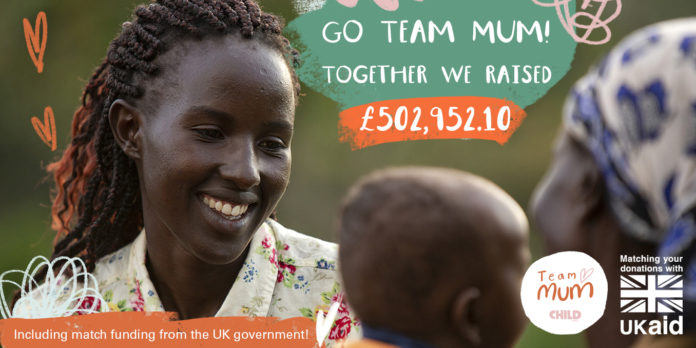 Thank you to every person who supported Child.org’s Team Mum appeal.

This amount includes match funding from the UK government and Gift Aid. Our original target was to raise £150,000 (matched to £300,000) which means Child.org can launch pregnancy support groups in rural Kenya this year, and give this small charity’s mother and baby programming a fantastic boost!

The beaming mums, supporters and Child.org staff were thrilled to announce a total of £502,952.10 – made up of money raised during the appeal and matched funding from the UK government.

The money from the UK government will be used to create pregnancy support groups for mums in the region. In Kenya, one in 26 babies die before they reach their first birthday. By arming mums with vital health information and providing a solid support network, Child.org can transform the experience for new mums in this rural area of the country, where many are isolated and unconnected to local health services. Planning work to create these groups has already begun within the Child.org team and in the local community.

The appeal was spearheaded by a grassroots effort by the UK parenting online community through over 100 channels. Mum Muddling Through (mummuddlingthrough.com) encouraged her network to sell one thing for the appeal. Clary & Peg launched a limited edition range in Kenyan prints. A New Parent Crafts video created by Jungle Creations for their Craft Factory Kids Facebook channel attracted 2.8million views. Comedy duo Scummy Mummies held a live podcast event at Vault Festival.  Even online parenting giants Hoop and Mumsnet declared themselves “In Team Mum” with Hoop making their own generous donations to encourage people to take part in their annual parenting survey.

And it wasn’t just mums who  got on board. Father-hood.co.uk wrote about “Why this dad is in Team Mum”. Mighty fundraising organisation Soroptimist International Great Britain and Ireland raised thousands for the appeal over the three months, with International Women’s Day quizzes and other events. Choirs volunteered to sing in London stations for Mother’s Day.

“We could scarcely have imagined the way that the UK parenting community have thrown themselves behind this appeal. It seems it’s something we can all agree on – all mums, wherever they are, deserve access to the necessary information to keep themselves and their babies safe. Anyone who can imagine giving birth in a remote rural environment with no internet access, no NCT classes and no baby books to turn to can understand why this programme is so important.”

Thomas Muirhead, CEO of Child.org, said: “It’s fantastic to have smashed our target in our first ever UK Aid Match appeal. All donations made by members of the public  have been matched by the UK government, and we’ll be using this funding to creating pregnancy support groups in Meru as soon as possible. The additional money raised above  and beyond our target will give our small charity’s mother and baby programming a fantastic boost, and enable us to reach more mums and babies right when they most need our support.”

The pregnancy support groups funded by the appeal will launch in rural Kenya over the next year.

To receive updates as the project develops, register for the newsletter at child.org. You can read more about it here.