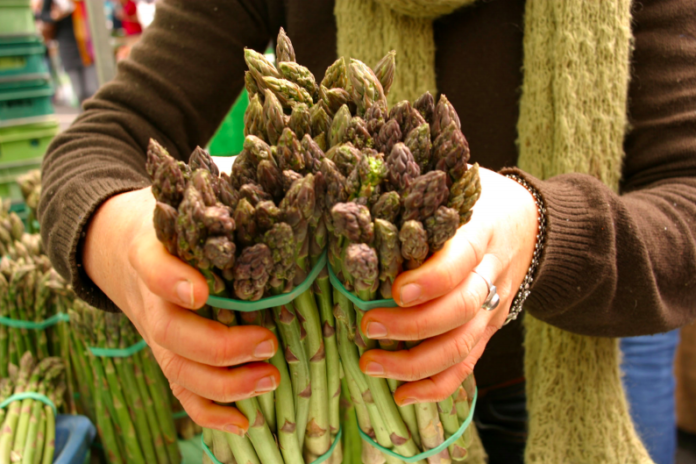 London Farmers Market Spruces into Spring with an Asparagus Festival

As British asparagus season spears into life, join the growers and stall holders at Pimlico Farmers Market on Saturday 12th May, as they launch The London Asparagus Festival all in celebration of the slender spruce. With delicious dishes and freshly picked produce from sustainable organic, British farms; keep those eyes peeled and hunt for the golden spears for the chance to win a tasty prize.

A delicacy of the vegetable world, Pimlico Farmers’ Markets will be celebrating the asparagus season with some fabulous feasts for guests to enjoy. Madame Gautier will be serving some delicious spreads, incorporating asparagus into their dishes, with produce fresh and ready to eat at the market. Delve into freshly baked asparagus tarts by Artisan Foods and indulge in something sweet from their baked goods range, including their famous traditional German cheesecake. Add a dash of green to your dishes with Phil Stanley’s deliciously handmade pesto’s to accompany his hand crafted pasta, which include shapes such as bucatini and hand rolled gnocchi. To celebrate the new season Phil will be serving up homemade asparagus pesto, alongside asparagus ravioli for the ultimate taste of British spring time.

Amongst the sea of green, keep a look out for those hidden golden spears, for the chance to win a basket of fresh, British asparagus from one of the trusted London Farmers Market producers. Proudly only selling produce from sustainable, British farms; spring annually marks the season that asparagus farmer Pip of S. Thorogood and Sons comes to London to sell the freshly picked spears they grow on their farm near Southminster, Essex. Sold loose in several grades, you can buy as little or as much as you want; so pop on down to Pimlico Road to ask Pip all the tips on how to cook, serve and keep asparagus to show it off at its best.

About London Farmers’ Markets:
London Farmers Markets opened their farmers market in June 1999 and now have 22 weekly markets in London with around 200 farmers and local producers selling across the markets. They enable farmers to sell their products direct to the consumer so that they get a fair price for their work. Instead of supermarkets or wholesalers taking a cut, farmers and fishermen at their markets take 100% of the retail price for the work they’ve put in. Most of the farmers at the markets come from within 100 miles of the M25, many a great deal closer. A few come from within 150 miles and occasionally we’ll have a guest producer from further afield.

Many farmers have cut out the middlemen and no longer sell to supermarkets. Some have established links with restaurants and other food outlets in London, selling to them directly. The markets provide the hub to make it viable to drive to London. Farmers can then sell at market and deliver to retailers.