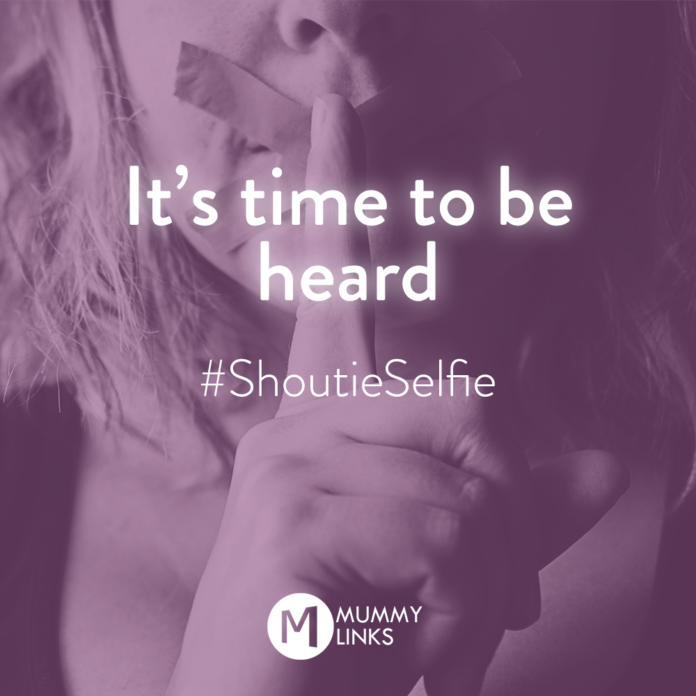 We are proud to support Maternal Mental Health Week 2018. Most mums struggle with mental health issues and we are happy to be taking part in Emily Tredget’s  from MummyLinks  online campaign with this great initiative #shoutieselfie.

#ShoutieSelfie is about raising awareness and reducing the stigma of PND and other maternal mental health illnesses. It’s not just for mums who have struggled – it’s for all mums, dads, families, and friends who know someone who has struggled with their mental health too. To stand together and say it’s ok and we support you.

A recent report by Dr Louise Howard of King’s College London stated that 1 in 4 mums struggle with their mental health during pregnancy. Another found that more than 1 in 3 mums struggle post-natally. This might seem high, but in a recent MummyLinks survey 70% said they were currently, or had suffered with a mental health issue. Almost 30% struggled with depression, 30% with anxiety, and 15% with other issues such as OCD and PTSD.

So why are these figures so high? And seem to be rising?

One reason is that we are talking about it more. We’ve seen leaps and bounds in progress regarding talking about mental health recently – and the celebrities and key figures have been great at helping this cause from Gwyneth Paltrow, to Stacey Solomon, to Andrea Leadsom.  This does make it seem that the instances are rising. But is it just that people are more open about it? People didn’t used to talk about cancer after all, and now we wouldn’t dream of hiding that away.

But is there a bigger issue? Emily Tredget believes so. She says:

“Despite feeling more connected through social media, mums are more lonely than ever.”

Her MummyLinks survey also asked mums how lonely they felt and almost half of the mums surveyed had high levels of loneliness (66 or more out of 100), and all mums said they were lonely some of the time. Interestingly she found that being part of a service such as NCT reduced loneliness by 22% – coincidentally, the same percentage that being part of NCT reduced mental health issues by. Of those not part of NCT 2 in 3 mums struggled. But for those part of NCT it was just 1 in 2.

“This doesn’t surprise me at all”, says Emily. “I found NCT invaluable – not only for teaching me about the birth itself, but more importantly for connecting with mums local to me who were going through the same experience, all within a month of each other.”

But, Emily believes that 1 in 2 struggling is still too high, and something needs to be done.

“Yes NCT is invaluable, but for some it’s too expensive, and even with this the rates of maternal mental health issues is just too high. Four mums close by is great, but this isn’t enough of a community to help you through when things get tough, or you just want to get out of the house and they’re not free.”

Maternal Mental Health week is taking place from 30th April – 6thMay and we are proud to be supporting Emily’s campaign  #ShoutieSelfie.  We want to help raise awareness of maternal mental health and fight the stigma. Emily first  ran this in  in 2017 having just 2 months of social media experience, and 10 days to plan it. Despite this she got maternal mental health trending in its first half an hour and 1 million impressions. This year she is arranging an even bigger campaign with thousands of supporters – from NCT, to PANDAS, including Kensington Mums ready to hit social media with their “shoutie selfie” to get people talking. Watch closely and you might even see a celebrity face or two shouting that week!

Emily adds “#ShoutieSelfie is so important to me. I struggled with PND, PNA and PTSD after the birth of my son in 2015. Instead of being the best time of my life it was the worst. I went from being a confident and successful woman, to being scared to have coffee with a close friend. I was anxious whenever I was left alone with my son because I didn’t believe I knew how to look after him. It wasn’t until I started hearing that it wasn’t just me that was struggling. That others did too, that I realised it wasn’t that I was an awful person and mother. I was ill, and I could get help. And that’s why I’m now on a mission to ensure all mums – and dads – currently struggling know they are not alone and that they can get better.”

Founder of Kensington Mums, Dina Maktabi can also relate to this ” for me being a mum is a great blessing but also the toughest job out there. I felt very lonely and isolated when I became a mother and the reason why Kensington Mums was created, was to connect and meet with other like minded mums, this was very important for myself and my wellbeing and I believe that every mother needs this support network around her”.

The campaign helps to reduce the stigma, but doesn’t do anything to reduce the loneliness felt on a day to day basis by millions of mothers in the UK and worldwide. So Emily isn’t stopping there. She has been working tirelessly to create a new app to help mums beat loneliness through safe and local playdates. MummyLinks is currently a facebook group, but by summer the app will be out for mums to test.

“When I was struggling with loneliness – which for me lead to post natal depression – I set up a local whatsapp group of mums I knew, and they added mums they knew locally. It was great as if somebody cancelled last minute, or you haven’t arranged a playdate, you could ping a message out to a large number of local mums at once and usual find someone also keen to meet –whether you knew them directly, or not. But I realised I was lucky to be in this situation, and even with 15 or so mums in the group, sometimes nobody was free. I often wanted an app to do this – I didn’t mind meeting a new mum, I just wanted a reason to get out of the house and a chat!” The group is by invite only, which for Emily is key.

Emily adds “I may not have tons of investment, but I truly believe that the community we are creating is going to be highly beneficial. Not just to mums struggling with mental health issues – to all mums. And if we can reduce loneliness, and therefore some cases of mental health issues, then I have achieved what I set out to do.”

To get involved with the campaign on 30th April take your #ShoutieSelfie and post it on social media tagging @mummylinks and @kensingtonmums we can’t wait to see your #shoutieselfie to help raising awareness and reducing the stigma of PND and other maternal mental health illnesses.